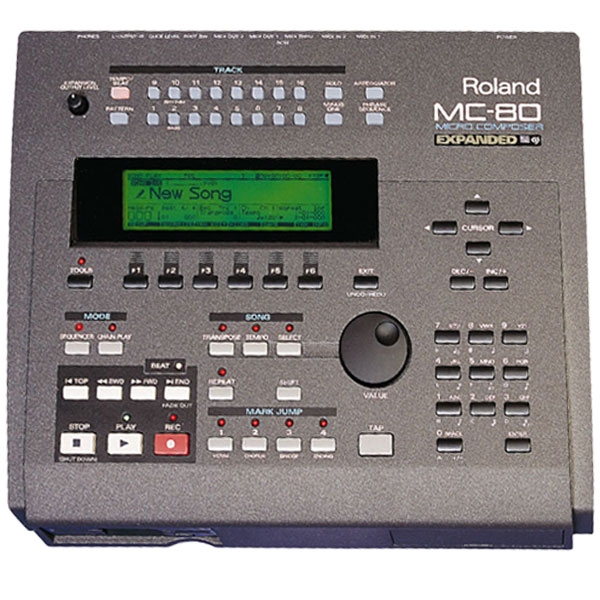 Descrizione:
Roland’s MC-80EX is a unique instrument comprising a tabletop sequencer and synth engine (see Fig. 5). It’s actually an MC-80 with the Roland VE-GSPro Expansion Board preinstalled. If it’s not everyone’s idea of fun, it certainly is practical and extremely useful in live situations for backing tracks or for just playing MIDI files. The GS sound engine is an exact replica of the SC-88 Pro Sound Canvas, widely regarded as the pinnacle of GM sounds and capabilities.

GM sounds. The MC-80EX offers Roland’s GS format all the way, with more than 1,000 custom-built sounds displaying both depth and quality. The electric pianos are a joy, the guitars and basses are cool, and it features plenty of interesting synths and sound effects. In fact, the MC-80EX boasts only a few less options than Roland ED’s top dog, the SC-8850 Sound Canvas.

The MC-80EX offers full compatibility with GM1 and GS sequence data. Its own DD/HD disk drive permits users to load and store sequences in a wide variety of formats, including Roland MC-80, MRC/S-MRC, and SMF Type 0 and 1.

Other sounds, features, and drums. First, the MC-80EX is a hardware sequencer. Descended from a long and illustrious line of sequencers that began with the MC-500, the MC-80 is the world’s premier hardware sequencer. It has survived in spite of the computer-sequencer revolution because of its dependability, durability, and lack of frills that can easily cloud the creative process. The MC-80 offers 16 tracks, each of which can hold 16 MIDI channels of data. With 120,000-event capacity, 480 ppqn, phrase tracks, arpeggiator, and handy Mark/ Jump buttons, this is a professional tool.