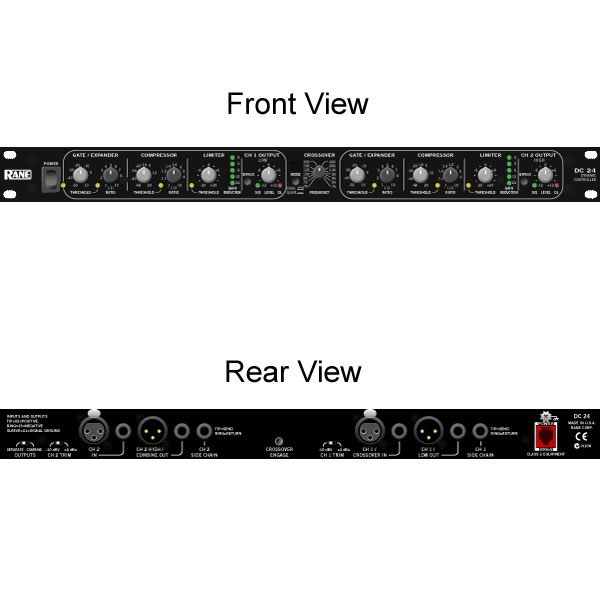 Descrizione:
The rane model dc 24 dynamic controller is a two channel compressor, limiter, gate/expander system with very unusual attributes. the dc 24 offers unprecedented control of its operating parameters as well as a built-in 24 db/octave linkwitz-riley crossover, giving it very impressive capabilities. total freedom from control interaction highlight the dc 24 as well as the availability of separate compressor and limiter controls. the compressor offers control over both ratio and threshold, while the limiter allows setting a separate threshold. in doing this, the dc 24 allows the operator to create a smooth transition between subtle compression over a wide dynamic range and peak-stop limiting at the sound system's highest allowable level. if that's not enough, the dc 24 also offers independent gate/expander ratio and threshold controls. this third level of signal manipulation makes the dc 24 a most useful and revolutionary device. attack and release times are automatic and program dependent. this simplifies use of the dc 24, as these subtle controls can confuse most users. history has proven that experienced compressor users rarely miss these controls after using a dc 24. the internal crossover allows the dc 24 to operate as a two-way speaker dividing network along with a fully featured gate, compressor and limiter on each output. in addition to this application, the dc 24 supplies the necessary circuitry to allow the unit to divide a single channel of audio information in two separate frequency ranges and to then recombine the program material into one channel. this eliminates the pumping and breathing associated with compression and limiting when only one channel is used to cover the entire audio spectrum. the dc 24 provides both balanced xlr and balanced/unbalanced 1/4" trs inputs and outputs. 1/4" trs side-chain inserts are available in each channel.
Scheda tecnica:Two channels of compression/limiting with gates compression and expander/gate ratio and threshold controls limiter threshold controls program dependent attack and release stereo/dual modes side chain insert jacks -10dbv / +4dbu gain switch