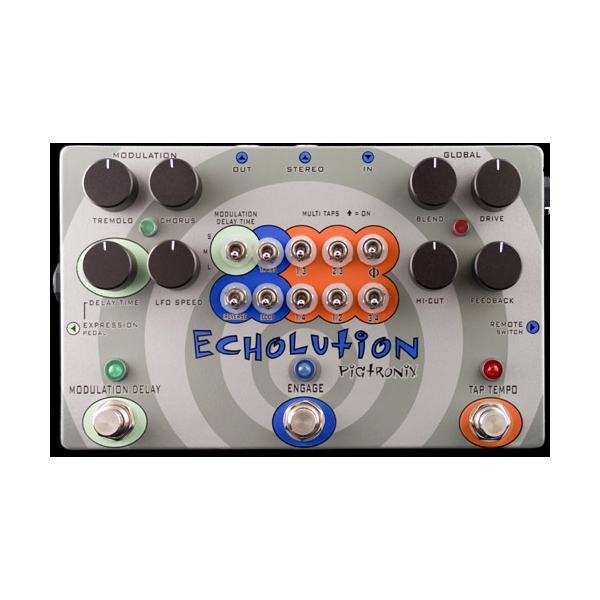 Descrizione:
The pigtronix echolution achieves the warmth and ambient saturation of the finest analog echo devices while offering the versatility and features found in high-end digital delays. the echolution is a dual delay, with independent tap tempo and modulation delay modes. this arrangement allows the musician to switch between different delay sounds on the fly. when set to tap tempo mode, the echolution has a maximum delay time of 20 seconds and a minimum delay time of 10ms. an on-board momentary switch lets the musician easily set the tempo of the delay. the modulation delay mode operates over three distinct time ranges, providing easy access to a huge array of delay based effects. the short setting (10ms-120ms) provides stereo chorus, reverb and slapback sounds. the medium setting (100ms-1.2sec) covers classic bbd and tape echo territory with lush modulation and rich analog sound. the long setting (1sec-12sec) allows for sound on sound, looping and reverse playback as well as rhythmic multi-tap patterns and pitch bending madness. what truly sets echolution apart are the multi-tap toggle switches which introduce any combination of five additional echoes at musical fractions of the master delay time. the values of these fractions are based on quarter notes and triplets. engaging the phi switch realigns all of these fractions to values based on the golden ratio. the golden ratio creates a spiral rhythm that is found throughout the universe. it is observed in the shapes of galaxies, sea shells, dna, the egyptian pyramids as well as in the work of many great musicians. chorus (pitch) and tremolo (amplitude) modulation of the delay signal are controlled by a single analog lfo. independent depth controls allow both types of modulation to be blended for rotary speaker sounds and other warped effects. an expression pedal input for changing the delay time gives the musician even further stage friendly control over the echolution's time and pitch bending capabilities. other thoughtful features include a stereo blend control that mixes the pure analog input signal with the echo signal, a trails switch that allows echoes to fade gradually after the effect is bypassed and a input drive control, which can push the echoes into massive saturation. true stereo outputs provide breathtaking 3d sound when used with two amps or direct into a mixer. the echolution contains a loop feature that freezes the content of the delay line and repeats the captured audio. when the loop function is engaged, all of the modulation and multi-tap functions remain active, allowing you to warp and manipulate the sample beyond all recognition and then back again to its original sonic form. the echolution can also operate its delay line in reverse for backward sounds that are truly psychedelic. reverse and loop functions are both switchable via a two button trs remote switch. a variable hi-cut filter gives continuous control of the lpf cutoff frequency. runaway self-oscillation can be achieved by cranking up the feedback control. once a sample is looped, it can be manipulated and warped by changing the delay time and multi tap settings.
Scheda tecnica:- unique analog / digital hybrid architecture - switchable tap tempo and modulation delay - analog lfo modulation for chorus and tremolo - reverse and loop modes with remote switching - 6-part multi tap with (phi) golden ratio switch - top quality design, components and workmanship - trails switch lets echoes fade naturally after bypass - capable of self oscillation without digital clipping - non-linear filters provide analog saturation - pigtronix 15vdc power supply included - true stereo outputs - made in the usa!